I was eleven and had just finished my primary school, when, on a morning while walking along the streets of Valdicastello, my beloved village that was still recovering, like the rest of the Italian villages, from the disaster of the second world war, an awful war, that had made my childhood so miserable, I met with Lino, who was, at the time, employed in a company in Pietrasanta and who, sitting on a flight of stairs, looked at me, as if evaluating me and said:

“You, child, would you like to learn to make mosaics? My company has been looking for an apprentice, but we need someone who has a strong attitude at work”

I looked at him, smiled and said: “I certainly would, very much so, but I need to talk to my mother and father and I will let you know”.

In those days we used to use the “thou form” to address the elders or simply anyone older than us. It was a sign of deference and respect and it came natural to us, without too much thinking and I spoke to Lino in this deferential way, naturally.

I ran away, as fast as I could, to tell my mother about this offer, so wonderful, so great, so bigger than me, that made me feel a man, already, a grown up and, the following morning, I got up at the cockcrow and with a heart beating fast, very fast, I started walking to Pietrasanta, carrying a bag that contained my lunch, a big bag, much bigger than me, that I dragged on the road because of its weight and dimensions.

The walk, that morning, as for the following mornings, was short, since I met along the road with Napoleone, Ernesta’s husband,who gave me a lift on his bike, so that I arrived early in front of the gate of Messrs Ferrari&Bacci.

I went in and looked around, discovering a world made of colours and shapes, figures and tiny pieces of coloured glazes, big wooden benches the workers were bending on, with a small hammer in their hands, whistling a song, in a happy mood.

There were 6 workers, and thinking back now, there weren’t too much older than me, being as they were in their 20s, but to me, on that day, they looked all grown up…

I remember the oldest one was only 30 years old, but in those days, at the age of 30 years old we were all grown ups with family and children.
In those days we had big responsibilities: we had to rebuild a nation.

After a short visit, short, because there was a lot of work to be done and no time to waste, Mr Ferrari, we used to call him this way and I kept calling him this way for the rest of our life together, gave me a pair of scissor and told me :“ Go and copy them on a sheet of paper and then fill the shape up with mosaics”, and while saying so, he passed on to me a small box full of multicoloured pieces of glazes. 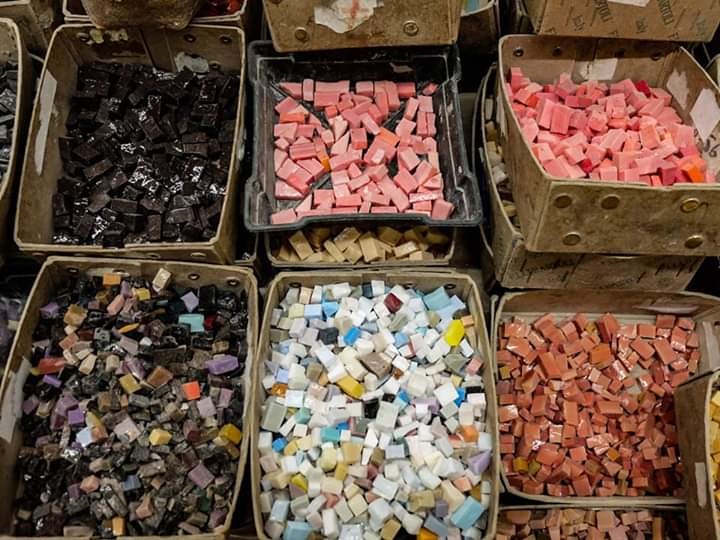 I sat down and drew the scissors.
Then I started gluing the tiny pieces, by paying attention not to go over the lines I drew.
Nobody told me anything.
Nobody gave me instructions.
I followed my instincts and went on and on until the smallest white space was filled up with colours and shape.

Once finished, I took it to Mr Ferrari, with a bit of anxiety, but he didn’t utter a word and simply took my hand, placed it on a white piece of paper and with a pencil he drew the shape of my child’s hand, an awkward and unexperienced child, and told me : “ Now, fill this up”.
My first day started this way, with few words, a pair of scissors and a hand that became mosaics. 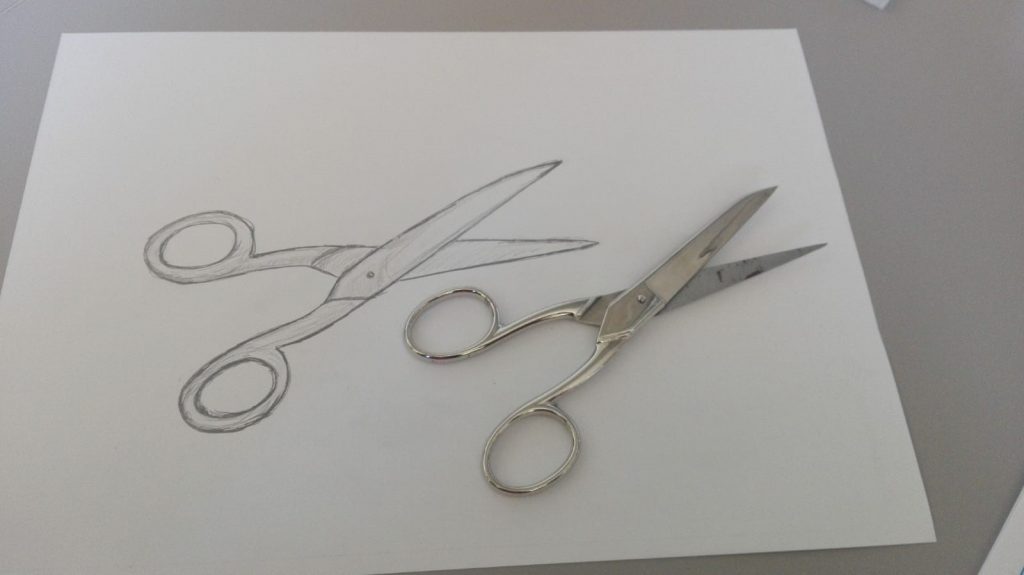 It started without too much speaking, with no training courses, no books, it started with an experience.
Days flew away fast and became weeks and months and I got closer and closer to the great world of the colour matching and started handling the mosaic maker’s tools: the small hammer and the nippers.

There were tools of different colours and dimensions and I, being a child, was given the smallest ones, so I could handle them easily.
I was charmed, fascinated by them: the small hammer was made by tempered steel, handmade by the famous Messers Brunini in Ponterosso and my world opened to a vast realm of possibilities.
I tapped, slightly, on the glaze and made it into small pieces, trying to give them a shape, a thickness, a dimension.
I was the only child working there: a silent, passionate child. 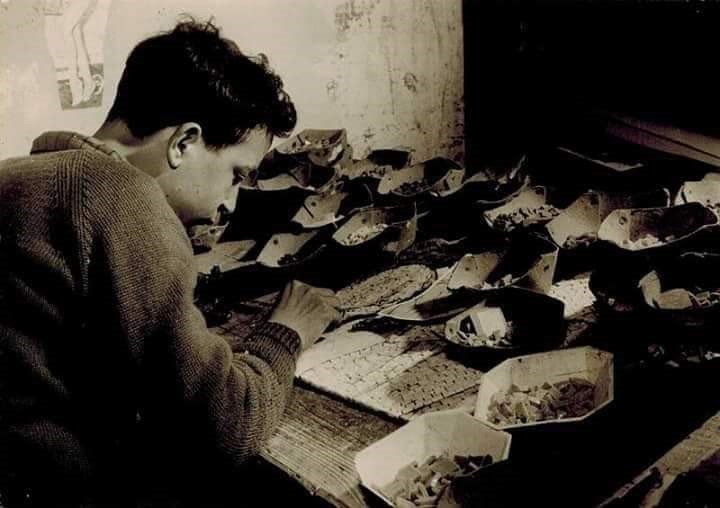 The grownups started loving me and teaching me, each of them for what they knew and for what their knowledge was.
My master, then and forever, was Mr Ferrari, the most talented man I have ever met, able to perceive in a glimpse, the shape, the colour, the dimensions that were right, simply, naturally right for the piece he was working on.

The problem, my problem, everybody’s problem, was the glue, made with wheat flour, that was inclined to crystallize, to dry, as we used to say and caused the mosaic to sever from its basis, after all the work, without any notice.

Years went by and my wages, paid at the end of every week, became a real salary and from the 200 liras of the beginning, I found myself hired as a specialized worker, after 3 years’ time only.
I was 14, I felt like a man, I felt I was a grown-up, because I was bringing home a real salary.
I was happy.

I went on learning and after 7 years, I was able to do everything.
I was good at making drapery and I started working on commission, as we used to in the past, earning four times as much as I did, working on Saturdays, focused on a project only: building a house to provide my family with.
I was 18 years old, when mosaics made me live my first great adventure abroad and off I flew to Malta to install a floor and an apse in a Church. 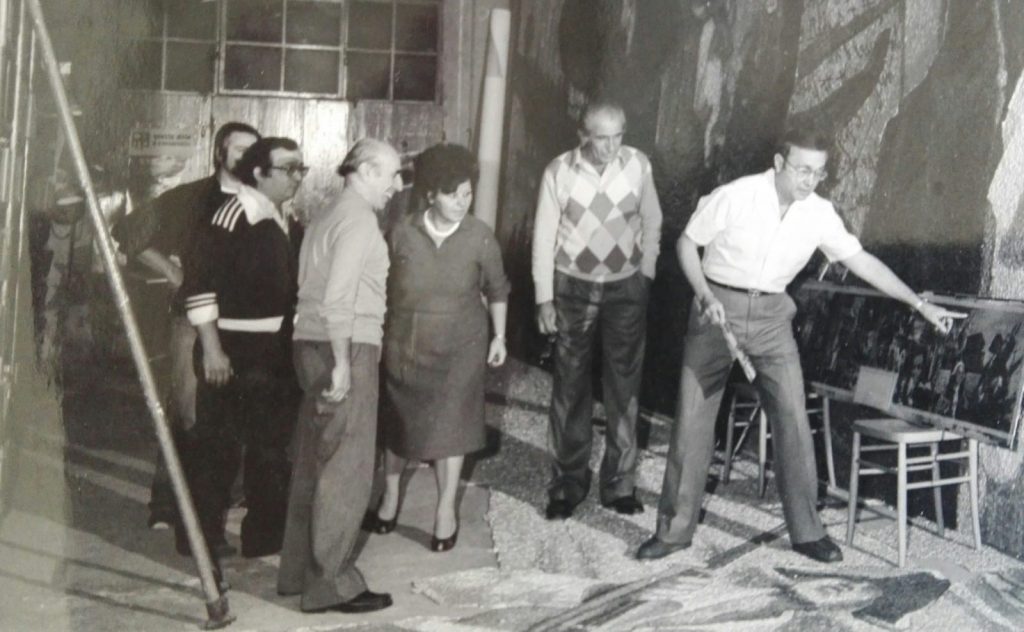 How wonderful to be able to see the world, to explore new landscapes, to listen to new languages, to see new places and all thank to those tiny pieces of coloured glass that could transport me into another reality, as if by magic.

I grew up and I got so trained that I could do anything, working on the most difficult materials like gold, that cheats on the mosaic maker’s eye, because by working inside out, you lose the nuances that help you keep on the trail of work, and it was then that I started understanding that being great at mosaics does not come from the hands, but from the brain, from the ability to understand the drawing, the project.

But something was still missing to have my training completed, an important thing, that I, nowadays, am very well aware of, that led me to understand that in doing mosaics you never stop learning, because every job is a new job, full of unknown, whose outcome will be there, under everybody’s eyes, only after it is finished, not before.

Because this is not a job, it is life, lived life.